Now I am six

Henri is our old soul.  And he often makes us laugh with his quirky comments. 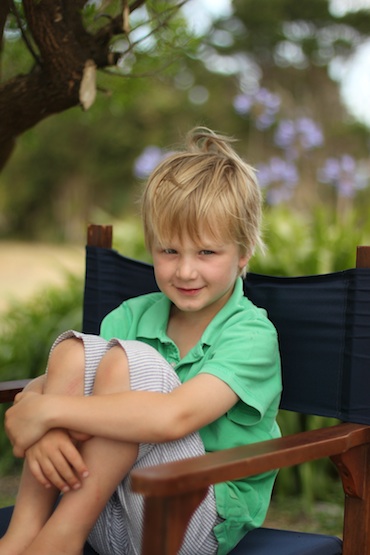 As Henri was cleaning his teeth tonight he said, "Next year I'm going to ask Santa for a little bit of his magic."  So sweet.  I told him I thought he already was magic.

The other day he and Will were sitting in the main street of Flinders waiting for Tom and Max.  They were chatting and, as Will is won't to do, he changed the subject.  Henri said, "Daddy, you're getting me sidetracked."  The elderly couple sitting near them commented on what a big word that was for a 6 year old.

As they later passed the couple on their way home Will tried to get Henri to say, "Let's expedite this mission", or something along those lines.  Alas, Henri didn't oblige.

I hope your magical boy had a super day and more importantly that he didn't get sidetracked or have to expedite any mission!
Emma x

Wow - I am only a blog observer and all, but that time seems to have gone fast; I remember seeing a very baby face in some of your early photos

Great photo Kris. I have a very wise 6 year old too. Her word of the day today was "randomly". I was v. impressed with its usage....

My just six year old surprised me today while showing me how to get to his friend's house - "and voila we're here," he said with just the right little flourish. They're too funny - hope your birthday boy had a lovely day. A x

Happy belated birthday to your sweet Henry.
I believe his comments denote a very active little head, full of curiosity and desire to learn and understand.
Keep a record of those comments Kristine, you will love to read them in a few years.
Cheers x

oh isn't he cute! I see a lot of you in his little face in that picture. I love when little ones say the cutest things...i bought some earrings on etsy and I opened them up and keira said 'oh mummy, they will be so perfect for a special occasion'.....I keep reminding myself that she's 4 not 14!

Congratulations!!! Six sounds like something to look forward to :-)

Aren't kids great! My oldest grandson (he was 4 at the time) kept using the word "actually" and using it correctly! And it was always something like.... "Well, actually grandma that's not how it's done at all!" Nothing like being corrected by a 4 year.... and you know, he was right! Enjoy your kiddo's! They grow up wayyyy too fast!