A quilt in the making
My creative space

Will was in Christchurch this week. He was in a meeting in his office in the CBD when the earthquake struck.  They took shelter in a door jamb. Their building (which is less than a hundred metres from the devastated CTV building) is newer and was fine. They were a little stunned, but it was only when they ventured into the street that the full magnitude of what had happened hit them. 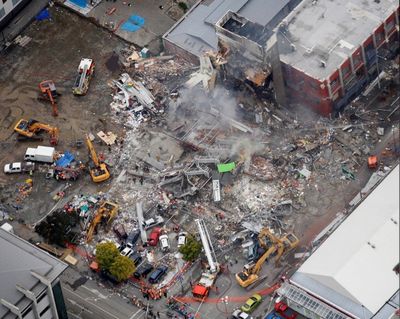 Will is the person you want to be with in a crisis. He's cool under pressure. Shortly after the quake he phoned his travel agent and got three different travel options out of Christchurch booked for him and his two Melbourne colleagues.

Still, the airport was closed that day, so they were in Christchurch for the night. He spent a sleepless night in his hotel - a three story building overlooking Hagley Park. The park is where thousands of people sheltered that night because their homes or hotels were destroyed. Will wasn't sure whether he was better off in the park or in his hotel room. The aftershocks kept him awake for most of the night and for several of them he sought shelter under the desk in his room.

He arrived home the next evening exhausted and very rattled.  He had photos for the boys of the tanks that were parked outside his hotel. The whole thing was frightening. The cafe where they had lunched the day before was shown on the news covered in fallen masonry. The restaurant they were booked to eat in on the night of the quake was on the Melbourne evening news - totally destroyed. It was all too close for comfort. 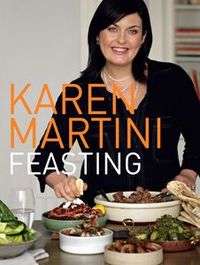 So tonight we're going to enjoy the company of old, old friends and some good comfort food. I'm cooking a slow baked shoulder of lamb with a freekah salad and yoghurt dip from Karen Martini's great book (Thank you Jane for recommending Karen Martini in one of your earlier blog posts). I might follow it up with a simple Nigella chocolate pudding with lashings of vanilla ice-cream and cream. Diet be damned.

So glad he's ok! I know Christchurch well and am just horrified at the devastation. Very, very sad.

That surely is "too close for comfort" - so glad your dear husband is home safe and sound. Recent times emphasise that we need to treasure our loved ones and the moments we share with them. Enjoy your dinner tonight!
Christine xo

hi Kristine - my goodness that brings things close to home. It is all just the luck of the draw, I am coming to think. Glad Will is okay. And I must get that new KM book. Glad you like her. xoxo

So glad he is home safe

Hello Kristine! I'm also glad to know your husband is ok. Natural disasters are very frightening and I'm very sorry for the people who lost relatives or friends

that is too close for comfort. eat, drink and enjoy the company of friends and family.

So glad to hear he's home safely. So many terribly stories - it's a stark reminder of just how awful all the quakes are around the world and how many thousands of lives are affected each time. New Zealand is in a bit of a raw state this week. A x

Great news that Will is ok.

I make the same lamb, salad and dip all the time. Big favourite in our house...in fact, I am making it for a dear friend on Saturday night!

Goodness, that was a narrow escape Kristine; so glad Will and his friends were ok. What a frightening experience!
So, yes, eat, drink and count your blessings with your dear friends tonight.
By the way, the menu sounds mouth watering!!
Have a lovely weekend

Oh my! So happy to hear that your Will is safely home. I'm sure you're all hugging each other a little closer today. It's terrible to hear of the losses from the earthquake, our prayers are with those affected.

my heart went faster by just reading your post. I can't imagine how it must have been to be there...or to have a husband there while waiting to get him back home.

...makes you think about everyone that didn't get their loved ones home.

Happy to know your husband is safe!
I'll be glad to meet you if you travel here in Paris again (excuse me for my bad english!)...

Good Lord! What an amazing gift of luck Will ( and you all) had.Yes I think a fabulous feast is mandatory!!
All the best Kristine.xx

Hi Kristine
i've been a silent reader for while - love all your work. Glad to know that Will is safe and sound.I live in Christchurch and can't believe that today is a week from this tragic event. We are still hopeful for survivors.

So pleased to read that Will made it safely home to you and the children.Just reading your entry brought tears to my eyes thinking of the many who lost their lives.

On a different note (before I blubber all over the keyboard) we love the Karen Martini slow cooked shoulder of lamb. I did the paste on a deboned/butterflied leg of lamb last week and slow cooked it as well and it worked as well as the shoulder and not as fatty - Adelaide and Isabella don't like the fatty bits of the shoulder (they are at that age!)So far that is the only receipe I have cooked out of that book as I am not as in love with it as I am some of her other books I have although some of the baking looks nice.

Glad to hear you and yours are all safe and sound... (hugs)

Thank goodness your DH is well...
so many "natural disasters" all over the world lately. I'm sure that you gave you guy lots of hugs and kisses. So glad he is safe for you and your family. Our prayers go out to all those who were not.

oh Kris how did I miss this! oh my goodness me how absolutely scary for everyone involved.

go the big menu and eat whatever you want.

so glad he's safe and sound. I remember hubby was in tokyo when they had an earthquake and everyone was ringing me asking how he was - he slept through it!
Corrie:)

Can't believe you forgot to mention that Will was in christchurch!!! Thank god he is OK.