Yesterday Adelaide and I made a cake together. It's a simple lemon cake with a lemon syrup that is poured over the top. I'm betting 9 out of 10 Aussie girls reading this have this recipe on their kitchen shelf.  It's from Stephanie Alexander's orange book.

One of my mothers' group friends used to make this cake when we got together with our new babes.  It's a quick and simple recipe and the boys all gave it the thumbs up after having it in their school lunch today. 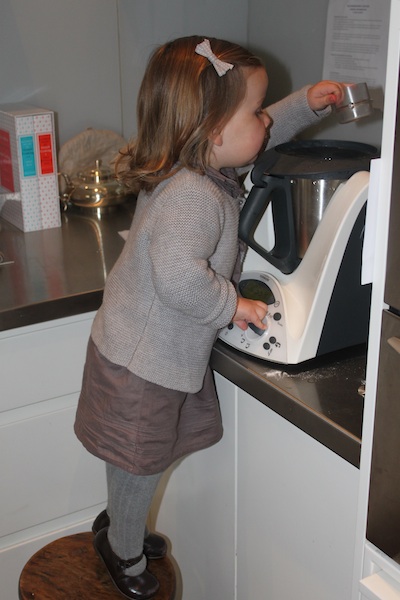 Adelaide enjoyed the baking process.  Her role was that of quality control. Checking consistency (above) and taste with a bit of spoon licking.

Later yesterday she was happily running down Glenferrie Road after a visit to the butcher with me.  She tripped. Her rather pronounced forehead gets a beating as it's always the first part of her head to hit the deck. She split her forehead open and there we were, on the busy footpath, both covered in blood, her screaming and drawing a bit of a crowd. I didn't even have a tissue on me.

I decided a quick trip to the chemist was required. We dashed across the road - her screaming all the way and looking severely injured with blood all over her face - and we kitted ourselves out with steri-strips and wipes.

By the time we got to Taekwondo to pick Tom up 10 minutes later she was happy as can be; just looking a little battle-scarred, and drawing shocked looks from the little children there.

But I'm happy to say my dodgy week has ended well today with a lovely girl's lunch organised by the boys' school for Mother's Day.  Always good to end the week on a high.

I Love my Bimbi a.k.a Thermomix. Lucy and I have got the buttermilk scones in the oven as a after dinner treat. Just looking at your blog while we're waiting for them to cook!

Oh Kristine, your sweetie Adelaide! I'm sorry about her forehead! This foto of hers is absolutely gorgeous. I love it!

Oh! Poor little thing, and poor you! I think little ones' injuries are as hard on mommy as they are on them. On a happier note, she is adorable, and getting so big! I can't believe that picture of her looking so grown-up and helping you with the cake. It seems like yesterday she was just a tiny little bundle!

oh, I love little Adelaide's outfit...so cute! Sounds like you dealt with her accident quite well, I can only imagine what a nightmare it was. Blood always makes things look worse, too. Great job, momma, and Happy Mother's Day to you! xo amy

oh the dear little thing. I still remember when keira walked into a table at country road, ladies came from everywhere with tissues and helping us out and she needed stitches. Lucky Adelaide to avoid that! She just looks adorable, aren't you lucky to have a little girl to dress up after 3 boys!

I cannot believe how grown up Adelaide is. Where did that time go?! She looks adorable helping out in the kitchen.

Too scared to try out the Thermomix, went to bed reading the instruction manual & recipe book last night, much to my husband's amusement!

I have a thermomix too, and I could not live without him now !

waouh it's my kitchen !!
sorry for my bad English :-( I discover your blog thanks to Citronille's friends

where is the link for your newsletter ??

she looks so sweet with those tights, and that ribbon just so. i am still loving my TM :)