Blogging from the snow, or lack thereof
Where I sew

Taking me skiing in March earlier this year was all part of Will's cunning plan. He wanted to get me hooked on skiing so we could have family skiing holidays.  Skiing was not part of my childhood.  Give me a Queensland beach over a snow covered mountain in Victoria any day. 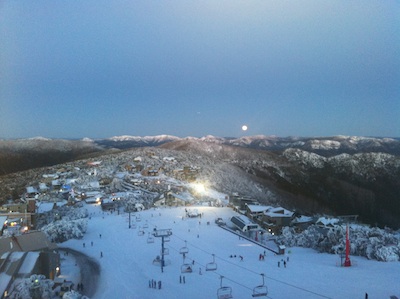 Well, his cunning plan worked and I am now happily embracing a ski holiday here and there.  Well more than here or there. We have committed to a whole season of skiing.  The three boys have enrolled in a seasonal program called "Team Extreme" which means they ski with the same group and instructor for the entire season.  That's every weekend and the school holidays.

So we have just enjoyed two weeks at the snow, where the boys skied from 9am to 3pm, 16 days in a row. Yes, that's a lot of skiing, isn't it.  Max and Tom now scoff at my skiing, the fact that I don't like black runs, and that I go at a more moderate pace than them. 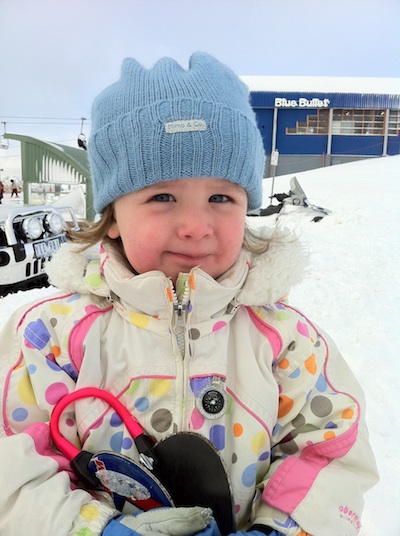 Even Adelaide has embraced the sport.  Here she is about to head off on skis for the first time.  (She looks so much older in this photo.)  I'm not sure how to read her expression.  It looks like she's thinking, "Are you really going to make me do this?" In reality, she had the wind in her face and was probably just damn cold.  But it didn't deter her. She went straight down an intermediate run between Daddy's legs, and later did the same with big brother Tom leading the way.  Some friends leant us a little pair of 2 year old skis and boots.  She thinks they're fabulous (she's a typical girl and loves shoes) and keeps dragging them out and trying to put them on.  If I don't look out she too will be better than me soon. Fun and games.

This sounds like a lot of fun for the boys! Mi first skiing experience was in Australia, can you believe it? and despite having a snow resort one hour away from home, have never been inclined to try again....till last winter, when we took the kids for their first lessons. Trying to keep 5 kids under 5 in line was interesting...and lots of fun. Who knows, I may even consider taking classes myself next year!
Yes, Adelaide looks very grown up in the picture! And terribly cute too!

awesome views, especially the first picture where people are skating and there is slight sun shine at the back ground.

I think you and I need to go on a girls weekend to the sun!! Lets relive the old days and head north, maybe a spot of windsurfing...ahhhh to be 17 again.
(Glad you're having fun though - it is such a beautiful sport)

Beautiful scenes at the back, sun shining ice a bit clouds in snaps all things together making this a memorable picture.

nice pic..skiing holidays are as fun as beach holidays or even better