A thread for any use
Big decisions

This restaurant is owned by Richard, an old school friend of Will's.  Those Melbourne readers might know and love Becco, Richard's first Melbourne restaurant.

There was much controversy when Becco first opened about 12 years ago, because the owners refused admittance to a rather acerbic restaurant critic with a wide readership and the capability to destroy a restaurant with one cruel review.  The irony is the critic would have no doubt had good things to say about Becco because it quickly became, and has remained, hugely successful.  But it was a brilliant marketing strategy on the part of the owners (whether intended or not) because it gave the restaurant much attention.  There were many people in the food and restaurant world who either despised or revered the critic so it was a hot topic for a while. 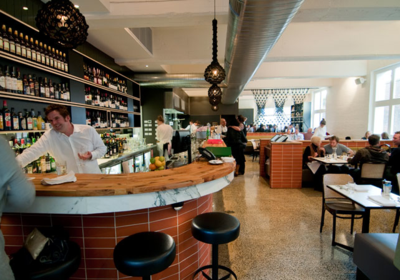 Lupino is Richard's latest offering. I haven't tried it yet so looking forward to a date with my husband at what I'm sure will be a great spot.

So? How was dinner? I read "home made" pasta, so yummy.
I like the logo and font chosen for the restaurant name, very 70's.
Have a lovely weekend xx

ps- have you started your bridge lesson? how fun!

I always remember as a teenager when my brother was an apprentice chef at a famous place, that a famous food critic came to the restaurant where he was working and wrote a terrible review for a main broadsheet paper and the head chef told my brother that next time that critic came in he would "%&$# on his plate". I never quite forgot the language! Perhaps the same reviewer!!

Wow - good on him. I think the last time I was at Becco is when we went for your hens day!! Glad to see he has another venture - maybe we should have our next dinner there?