The most beautiful beaches in the world 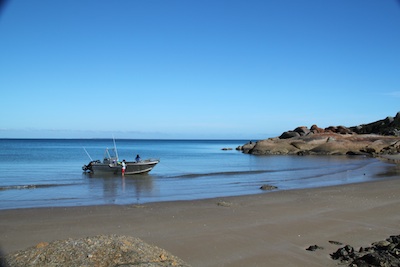 The calm conditions enabled us to take the boat out and explore some of the beaches on the far side of the island.  We chose Friday 13th as the day to visit Dead Man's Cove.  This deep, sheltered cove got it's name from a nasty incident involving a scientist and some torpedoes.  He was left there to test his weapons and when his colleagues returned they found he'd blown himself up.  Just one of the colourful stories that make part of the history of this fascinating place. 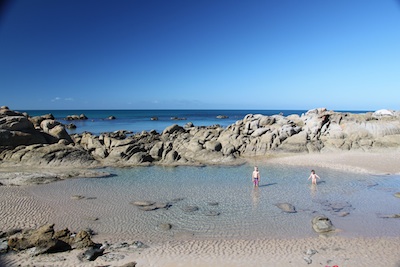 After lunch at Dead Man's Cove we headed for home, and found this unamed beach to pull into.  It had a perfect rockpool for Adelaide to frolic in. 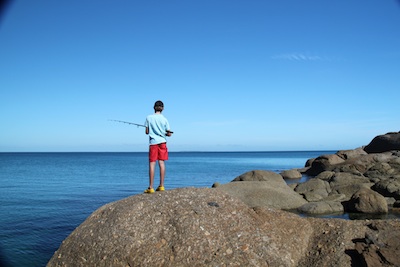 Meanwhile the boys threw their lines into the crystal clear water. 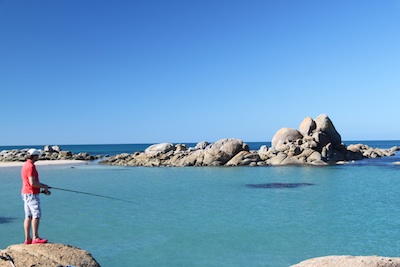 Will was needed to help Henri cast out his line.  Henri was very excited when he caught his first fish of the holiday.  I was happy to see it get put back into the ocean.

For the half hour trip home in the boat Adelaide fell asleep in my arms while we bobbed along.  After the girls were dropped ashore, Will and boys headed out into Home Bay and caught flathead for dinner.  We declared it a memorable and near-perfect day.

It looks just perfect. Ben will be so jealous you went to a place called 'Dead Man's Cove'.

Sounds like the perfect holiday. What wonderful memories your children will have of family holidays.
One day I hope we will go there too.