A bit of a break from garment making today to do a little necessary crafting for the home. 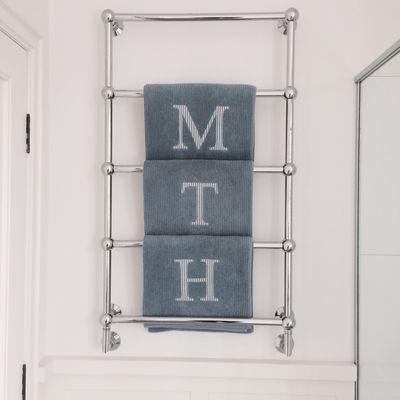 There's been a bit of squabbling amongst the boys about who is using whose towel. (Hmm, just had to look that grammar up.)

This isn't the first time I've been known to monogram a towel - I do love a monogram.  This time, I worked out where on the towel to put the letter so it would work when the towels are hanging up.

Of course it's never going to look this neat when the boys do it.  More than likely the towels will be in a damp heap on the bathroom floor, post shower. 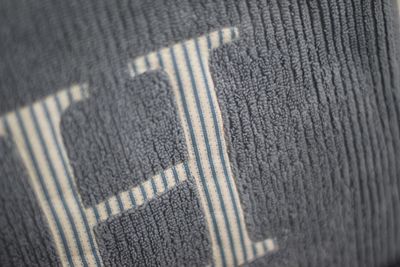 This font is Times New Roman at 598 pt.  I increased the font size until the letters just fitted one to a page.  To save printer ink I recommend putting the letters in outline mode.  Use some Heat'n'Bond Lite to adhere the letters.  Here's a uTube video explaining the technique.

Nice! Rather more chic than my solution of having a different coloured towel for every member of the family :)

These look stunning, such a stylish idea. What machine stitch did you use to attach the letters to the towel? Do you know if they stay on well through multiple washes?

I use a blanket stitch on my 15 year old Husqvarna viking. There is a similar stitch on the Janome. A zig-zag stitch would work just as well. With the heat'n'bond lite the monogram will stand up to as many washes as the towel. We have towels at our place at the snow that I did about 8 years ago. The appliqué has not budged at all.

Lovely Kristine - just wondering if you did one for Adelaide as I have 3 girls and 1 boy and what fabric you would use? x

Hi Sally, Adelaide has a pink towel so there is no confusion about which is her towel. The fabric I used was ordinary quilter's cotton. Any woven cotton would do the job. It's all about the Heat'n'Bond Lite, as it provides the glue that stops the fabric from fraying or moving. Hope that helps, Kris

Thanks Kris - my girls are all in their teens now and even though when they do wear makeup they cleanse sometimes there is some residue left and it's a big to do about whose towel has the makeup stain! You have this to look forward to! So I thought that monogrammed towels would solve so many issues - thanks for all the tips x